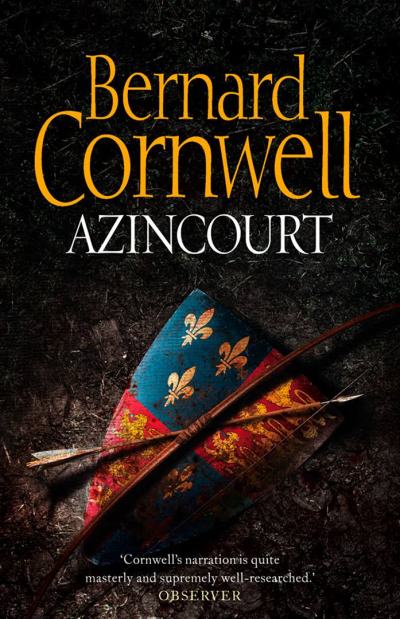 The 25th October marks the 600th anniversary of the battle of Agincourt, and what better way to remember the occasion than to read a highly evocative and remarkably convincing novel based on the battle itself. My first foray into the writings of Bernard Cornwell turned out to be a gut-wrenching, breath-taking and truly mesmerising experience. This is not a book for the faint of heart, Cornwell wields his pen like an axe, severing limbs from men left, right and centre until the pages are saturated in blood. Azincourt is disturbingly real and horrific in its truth; bloody, brutal and brilliant.

An extraordinary and dramatic depiction of the legendary battle of Agincourt from the number one historical novelist.

Azincourt, fought on October 25th 1415, St Crispin’s Day, is one of England’s best-known battles, in part through the brilliant depiction of it in Shakespeare’s Henry V, in part because it was a brilliant and unexpected English victory and in part because it was the first battle won by the use of the longbow – a weapon developed by the English which enabled them to dominate the European battlefields for the rest of the century.

Bernard Cornwell’s Azincourt is a vivid, breathtaking and meticulously well-researched account of this momentous battle and its aftermath. From the varying viewpoints of nobles, peasants, archers, and horsemen, Azincourt skilfully brings to life the hours of relentless fighting, the desperation of an army crippled by disease and the exceptional bravery of the English soldiers.

This novel tells the story of Henry V’s invasion of Normandy, from the prolonged siege of Harfleur and the subsequent march to Calais, to the battle of Agincourt itself. This is a tale of war and blood and death – of the rape and slaughter of civilians, of soldiers cut down in their thousands, and of men dying in true ignoble glory – hacked out in vivid and utterly convincing detail.

Cornwell has quite obviously done a considerable amount of research; the manner of warfare – the weaponry, the armour, the battles – are all described in incredible (and somewhat bloody) detail. Azincourt is simultaneously a lovesong to the English longbow. Told through the narrative of the protagonist, Nick Hook, Cornwell describes its use and implementation as the powerhouse of medieval warfare in rich detail. This depth of research creates a narrative which has all the action and drama of a movie whilst remaining true to the history.

If you like your characters in shades of grey, and splattered in blood, gore and shit, then Azincourt has a whole legion to supply. Cornwell creates characters who are either brilliantly psychotic or horrifically deranged, and even our protagonist Nick Hook makes a hard job of conjuring up any rapport. Strength and heroism are not exclusive to the good and just after all. But don’t let that put you off; this isn’t a novel about likeability, this is about one battle – this is about death and glory and the utter futility of both.

Azincourt is a novel written with gritty eloquence, fast-paced and to the point, whilst throwing in some of the most evocative passages of description I’ve ever read; both disturbingly realistic and eminently readable. Cornwell doesn’t shy away from the horrors of war, and neither does he pluck at the heartstrings – this is war; violent, bloody and terrible – brutal lives conveyed in brutal prose.

If you like your historical fiction like your grimdark fantasy, unflinchingly violent and bloody (and incredibly grim and dark), then I heartily recommend you read Azincourt. This is a fast paced and bloodthirsty tale which is supremely well researched. Bernard Cornwell is an incredible writer whose reputation as the master of historical fiction is well earned, I am only ashamed it took me so long to pick up one of his novels.