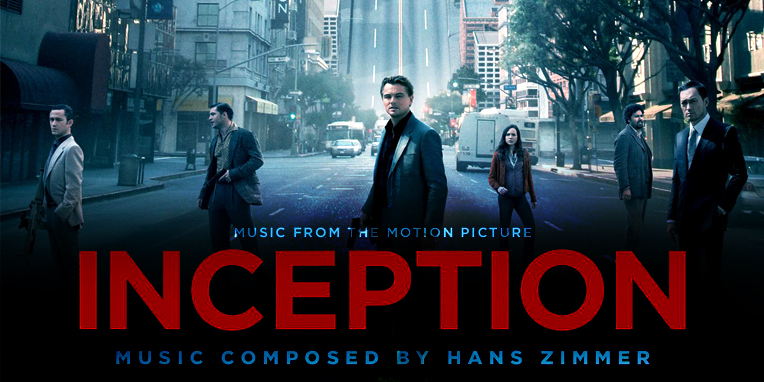 This week’s Bookish Beats is taking another visit to the silver screen with the Inception soundtrack, the stunning score composed by the incomparable Hans Zimmer. This soundtrack combines fast-paced action with tense atmospheric ambience to create an incredibly emotive and infinitely memorable score. The Inception OST is both powerful and haunting and is undoubtedly one of my favourite movie soundtracks of all time.

Inception is a soundtrack which Zimmer composed ‘blind’ – he wasn’t allowed to see the film once Christopher Nolan started editing the footage. This allowed Zimmer to wholly concentrate on the narrative of the film and has led to the creation of a liberated and multi-layered soundtrack which incorporates atmospheric electronics with a powerful brass section overlaid by the sweeping guitar sounds of Johnny Marr.

One of the most interesting features of this soundtrack is the use of the instantly recognisable horn section to denote a change from one level of dreaming to another. This beat was a slowed down extraction from Édith Piaf’s Non, Je Ne Regrette Rien, which also features in the soundtrack and movie.

This soundtrack’s heavy reliance on ambience makes this the perfect backdrop for reading, whilst its recognisable and powerful tracks provide a perfect backdrop to action and tense moments. Half Remembered Dream and One Simple Idea are both heavily atmospheric tracks, whilst Waiting for a Train, which samples Edith Piaf’s Non, je ne regrette rien, starts off in the same otherworldly way, gradually building the tension until the Piaf break where it fully saturates the track.

Action and tension are very much intertwined in this soundtrack. Dream Is Collapsing is incredibly iconic, the drawn out horn section powering slowly and deliberately to a backdrop of tense strings instantly transports you to a completely different world. Radical Notion takes the powerful horn section and repeats it in this paired down track, incorporating synths and string sections to create an eerie resonance throughout. Mombasa, however, is an action track through and through.

This score is not without it’s beautiful orchestral pieces either. The gentle, sweeping and downbeat We Built Our Own World and Old Souls, as well as the hugely popular Time are Inception’s key emotive tracks. There are also many tracks which exhibit the multi-layered approach – the dream-shift – to become tracks of two halves. 528491 opens with a slow, emotive piece which builds to a tense crescendo whilst Dream Within a Dream takes the same elements as Dream Is Collapsing to create a tense duality.

The Inception soundtrack is a beautiful and otherworldly score which can be listened to again and again and will remain one of my favourite backdrops for reading. Just listen for a moment and you’ll feel that shift and find yourself transported into the story – a world within a world.