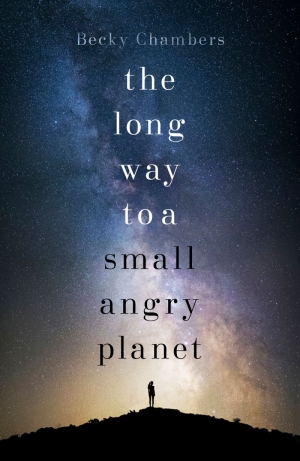 Welcome back to the Sci-Fi Month Read Along of The Long Way to a Small, Angry Planet by Becky Chambers, organised by Lisa at Over the Effing Rainbow. Here is my Week 2 catch-up to warm you up for the Week 3 post tomorrow! This book has really surprised me, combining both fantastic character dynamics with an absorbing plot.  I can’t wait to find out what happens next! The schedule is as follows:

“Transit” to “Port Coriol” – hosted by Over The Effing Rainbow

“Port Coriol” to “The Last War” – hosted by Chris @ Galleywampus

“The Last War” to “Heresy” – hosted by Claire Rousseau

“Heresy” to the end – hosted by Over The Effing Rainbow

There has been significant conversation about AI, what it means to be alive, whether or not AI should have rights, whether or not a person can fall in love with a specific instance of AI, etc. This is a bit of a sticky situation. After the discussion between Pepper and Jenks, how do you feel about Lovey’s and Jenks’ relationship? Should they move forward with their plan?

Ahh, the ultimate question – what does it mean to be human? What does it mean to be alive? To think, to feel and to grow. If a machine is capable of such thoughts and feelings, if their experiences shape them and make them something more than just a replicable program, should they be denied the rights that humans (and other sapient kind) claim as their own? Lovey learns from her experiences and they make her who she is – there is not another Lovey and, unless an AI was exposed to the exact same ‘life’ as her, there never would be.

I’m really intrigued by Lovey as an individual character alongside her relationship with Jenks. I love the interchange of ideas and thoughts between them, and how Lovey has already been thinking the decision through alone and has been weighing up the pros and cons. Despite the dangers associated with acquiring a body, I really want to see Lovey continue to grow as something more than just the ship’s AI. And damnit! If she wants a body, she should be allowed to have one!

I love the diversity displayed in this novel, I love the myriad of alien species and their unique and vibrant cultures. I love how the history of humanity has developed and how each of the new divisions of humanity views its own past. This is a great novel for contrasting the disharmony of human and alien history and politics with the comradeship shown between crew members of the Wayfarer and those they meet on their journey.

With regards to the question, I imagine on the whole it is easier to sympathise with the alien perspective. It is much easier to look at something that is entirely different to us and expect it to be so, and even excuse it for being so. If we see something of ourselves reflected in someone whose lifestyle, belief system or culture is completely opposed to our own, it is much harder for us to understand even if we do sympathise. But, to link this back to the first question, it is our differences as much as anything that make us who we are, that make us human. Otherwise we might as well be replicable programs to be uploaded into new and entirely manufactured bodies.

How might the ship robbery have been different if the Wayfarer were armed?

The robbery aboard ship allowed Rosemary to display her courage, her resourcefulness and her intelligence which, had the crew been armed, she wouldn’t have otherwise been able to show. Though the crew were already fond of her, Rosemary’s actions definitely establish her as a valuable asset to the crew of the Wayfarer. If the crew had been armed, this novel may have taken a much shorter (and messier) way to the end after all! And we also got to meet another weird and wonderful alien species. A win, win really!

As I finished the fourth chapter in my section, “Cricket,” I thought it might be a good place to stop and talk about some of our favorite humorous moments so far. What scenes really tickled your funny bone? Who makes you laugh the most and why?

‘Aw, it’s not so bad!’ chirped the pixel plant. ‘Give yourself a hug!’