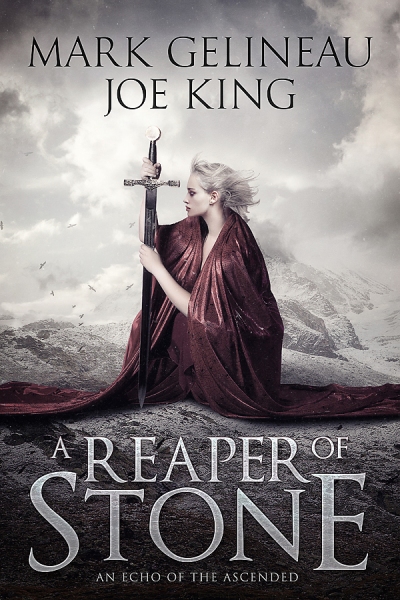 A Reaper of Stone

An Echo of the Ascended

by Mark Gelineau and Joe King

As a firmly established cover art magpie, I took one look at the beautiful artwork for A Reaper of Stone and thought ‘this is the novella for me!’; a novella which turned out to be extremely well written, incredibly enjoyable and had me on the hunt for more literary creations by Gelineau and King. This is a fast-paced fantasy novella which succeeds in drawing you into a world which appears intricate and fully realised, all in less than a hundred pages.

A Lady is dead. Her noble line ended. And the King’s Reaper has come to reclaim her land and her home. In the marches of Aedaron, only one thing is for certain. All keeps of the old world must fall.

Elinor struggles to find her place in the new world. She once dreamed of great things. Of becoming a hero in the ways of the old world. But now she is a Reaper. And her duty is clear. Destroy the old. Herald the new.

A Reaper of Stone follows the story of Elinor, a Reaper for the King who fells keeps and brings lands under his dominion. Elinor journeys with a team of engineers, a retinue of tiresome and entitled nobles, and a company of deadly Razors, those who are skilled with weapons and trained in magic fuelled combat. As they make their way through the lands of Aedaron, strongholds are razed to the ground, claimants are removed from power and the will of the King (and often his petty nobles) is at all times enforced.

There are some things in this new world they are creating, however, that weigh heavily on Elinor’s shoulders and, fuelled by her dreams of the heroes and valiant deeds of legend, the mission on which she is sent may not be the one she fulfils.

The world of Aedaron appears to have the depth and scope of a much lengthier narrative and, together with its inhabitants, is described in enough detail to keep the story flowing and give it a sense of realism that is sometimes lost in novellas. There is a sense of a greater world beyond what we read, a world full of history, myth and legend which lurks beneath the surface and works together with the narrative to create the impression of reading a much longer novel.

The people and monsters which inhabit Aedaron are extremely well depicted, and the characters, whilst reminiscent of those who grace the pages of many fantasy epics, use this recognition to connect fully with the reader. Elinor is a multifaceted protagonist who makes a charming fantasy heroine – a heroine who stands up for what is right whilst wielding a mace like a badass – and the side characters are suitably detailed to become firmly established in the imagination.

Gelineau and King have created a multi-layered world which resounds with the influence of epic and traditional fantasy yet unfolds in the fast-paced and action-filled narrative which we’ve come to expect from modern fantasy. The language used throughout is lyrical and descriptive, giving depth to the world and its creatures whilst driving the story and the action forward at all times. Gelineau and King have fashioned a universe I would wish to return to time and time again.

If you want a short read to break up those long tomes then look no further; A Reaper of Stone has the essence of a traditional fantasy epic, full of adventure and beautiful, lyrical prose, in well under a hundred pages. And luckily for us, Gelineau and King plan on publishing many more ‘Echoes’ with the promise of another Elinor Ascended novella in the near future. I for one cannot wait.

13 thoughts on “Review: A Reaper of Stone by Mark Gelineau and Joe King”