| Stranger of Tempest by Tom Lloyd |

Another day, another fabulous cover! Gollancz has revealed the cover art for Stranger of Tempest, the first book in a new series by Tom Lloyd, author of The Twilight Reign. Whilst I’m still making my way through this highly enjoyable stack of novels, I am so excited to see another addition to Lloyd’s repertoire. The cover for Stranger of Tempest by Jon Mccoy is a part Balrog, part Diablo mash-up and gives the impression of high octane action-packed and thrilling fantasy novel which I cannot wait to get my hands on! Take a look and see what you think! 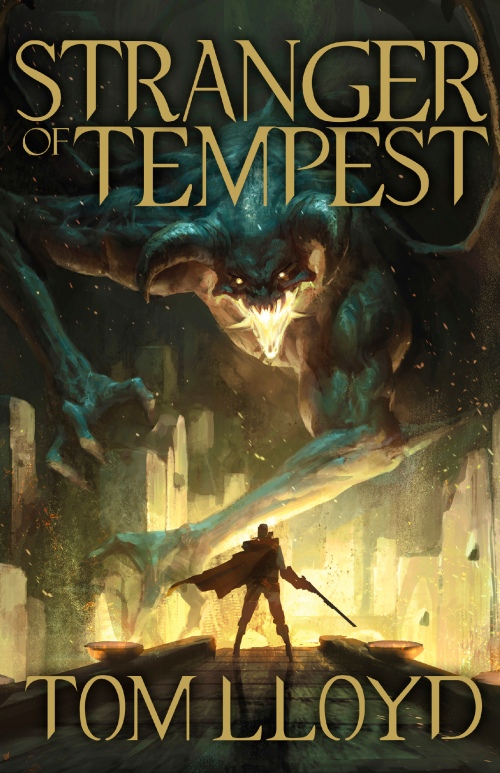 Book One of The God Fragments

Being an honest man in a lawless world is never easy…

Lynx is a mercenary with a sense of honour; a dying breed in the Riven Kingdom. Failed by the nation he served and weary of the skirmishes that plague the continent’s principalities, he walks the land in search of purpose. Bodyguard work keeps his belly full and his mage-gun loaded. It might never bring a man fame or wealth, but he’s not forced to rely on others or to kill without cause.

Little could compel Lynx to join a mercenary company, but he won’t turn his back on a kidnapped girl. At least the job seems simple enough; the mercenaries less stupid and vicious than most he’s met over the years.

So long as there are no surprises or hidden agendas along the way, it should work out fine.

What do you think of the cover for Stranger of Tempest? Does this sound like something you would read?

13 thoughts on “Cover Reveal: Stranger of Tempest by Tom Lloyd”