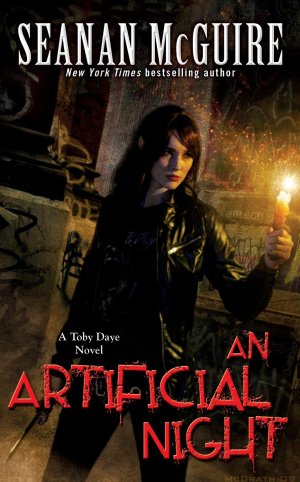 Welcome to the Read Along of An Artificial Night by Seanan McGuire, organised by Lisa at Over the Effing Rainbow.

Welcome to the third post in the An Artificial Night Read Along! Apologies for the lateness of this post – I’ve been away! Week three was hosted by the lovely Lynn of Lynn’s Books who had some rather juicy questions for us to answer!

If anyone would like to join in, just head on over to the Goodreads group and sign up. Here’s how the schedule looks:

Chapters 1-7 – hosted by Over the Effing Rainbow

Chapters 25-End – hosted by Over the Effing Rainbow

There will be spoilers!

We’ve seen a good deal more of May and her interactions with Toby – any speculation on how this might play out yet??

I really love the dynamic between Toby and May, especially during that car ride. So tense and funny and ridiculous – and it’s so unusual to have such a cheery version of Toby! May is clearly quite reticent about assisting Toby too much – there seem to be quite a few Fetch rules that we’ve only been given snippets on so far – but I love that she can be talked round into doing the very thing she’s protesting against. It makes her quite an endearing doppelgänger. Toby is, of course, sure to survive (at least in some shape or form) but I’ll be quite sad to see the back of May. I hope it’s not quite the end for her – I quite like the idea of her sticking around to make a nuisance of herself!

Tybalt – what did you make of his rather cryptic comment about what he found out and particularly that he now knows that Toby didn’t lie to him?

That was very cryptic now wasn’t it. Well for one – I have no idea what Toby may or may not have lied about! I was certain that when Tybalt buzzed off he had gone in search of answers to Toby’s unusual blood magic after resurrecting Alex… and now I’m almost sure he did! But I really couldn’t begin to guess what he found out. Perhaps he was referring to the Hope Chest and whether Toby had used it… or maybe there was another message further back which I missed… but whatever it is, I’m very VERY intrigued!!

We finally discovered a little bit more about Luna. What are your thoughts on her now, why did she run away, thoughts about her character, why she sent Toby into Michael’s realm?

Luna’s tale is a very sad one and I can’t help but feel both her and Acacia. She was more than justified in running away from her former life and it seems that she has found true love and happiness after all with Sylvester and her roses. However I feel like there must have been something more she could have done to help Toby, even if it was just giving her some advice. It seemed as though Toby was woefully unprepared to make the journey to Blind Michael’s realm yet the only people who could or were willing to help her in any obvious way were the Luidaeg and Quentin. But one thing is certain after all these revelations – it sure as hell explains Raysel.

What were your first impressions of the Court of Cats?

I almost feel like the Court of Cats is overwhelmingly underwhelming. I secretly hope there is a hidden aspect to it that isn’t revealed to any old changeling so that I can put my disappointment aside and truly bask in the wonder that is the Cait Sidhe. In fact I’m almost certain that Toby mentioned as much… Having said that, it is a very interesting and unusual court – in a grubby alley cat kind of way – and it has some really intriguing aspects to its function, hierarchy and its methods of inheritance. But no matter how much this intrigues me… I don’t want that Raj killing our Tybalt!

And, finally, back to Tybalt – what on earth just happened!!

Ahhh! I’m sure these chase scenes are going to give me a heart attack – they’re too fun by half! This latest run through the shadows was no exception and it looks like Tybalt’s paid Toby back tenfold. I loved the fact that he was there when she needed him – it seems like he would do anything to aid her – even if he was only recently stalking her from one darkened alley to the next. Toby’s reactions are definitely one of the most entertaining aspects of their interactions. Then he goes and saves her from the hunt… here’s hoping Tybalt survives to see the next page!

2 thoughts on “Read Along: An Artificial Night by Seanan McGuire – Week Three”