Welcome to Teaser Tuesdays – a weekly feature hosted by The Purple Booker. Expect a new teaser every week! 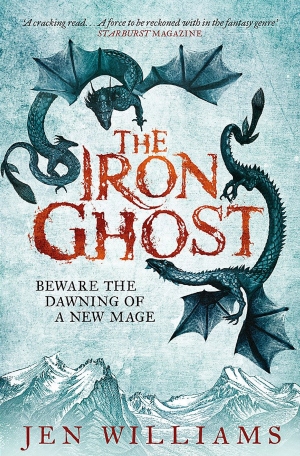 “Reluctantly, Wydrin looked up into the snow. The foot of the mountain rose before them like an ominous storm cloud, and rising from its centre was a great wound filled with lights and stone and smoke – the city of Skaldshollow.“

Beware the dawning of a new mage…

Wydrin of Crosshaven, Sir Sebastian and Lord Aaron Frith are experienced in the perils of stirring up the old gods. They are also familiar with defeating them, and the heroes of Baneswatch are now enjoying the perks of being very much in demand for their services.

When a job comes up in the distant city of Skaldshollow, it looks like easy coin – retrieve a stolen item, admire the views, get paid. But in a place twisted and haunted by ancient magic, with the most infamous mage of them all, Joah Demonsworn, making a reappearance, our heroes soon find themselves threatened by enemies on all sides, old and new. And in the frozen mountains, the stones are walking…

“There are strange things living in the pools and lakes in the hearts of mountains: fish whose fathers swam in, goodness only knows how many years ago, and never swam out again, while their eyes grew bigger and bigger and bigger from trying to see in the blackness; also there are other things more slimy than fish.”

The Hobbit is a tale of high adventure, undertaken by a company of dwarves in search of dragon-guarded gold. A reluctant partner in this perilous quest is Bilbo Baggins, a comfort-loving unambitious hobbit, who surprises even himself by his resourcefulness and skill as a burglar.

Encounters with trolls, goblins, dwarves, elves and giant spiders, conversations with the dragon, Smaug, and a rather unwilling presence at the Battle of Five Armies are just some of the adventures that befall Bilbo.

Bilbo Baggins has taken his place among the ranks of the immortals of children’s fiction. Written by Professor Tolkien for his own children, The Hobbit met with instant critical acclaim when published.