Welcome to The Friday Face-Off, a weekly meme here at Books by Proxy. Join me every Friday as I pit cover against cover, and publisher against publisher, to find the best artwork in our literary universe. Check out Lynn’s-Books for upcoming themes!

Welcome to the Friday Face-Off!

Having racked my brain for even a hint of tunnel, hole, burrow or mine, it became abundantly clear that this week’s Face-Off was not going to be easy! Luckily I had just finished Going Postal by Terry Pratchett, and you can always count on the myriad of Discworld novels to display one, if not several, of the weekly themes. Enter Raising Steam.

This week we are comparing two very similar covers of Raising Steam, illustrated by artist Paul Kidby; one published by Doubleday in 2013 and the other published by Corgi in 2014. Take a look and see which one is your favourite! 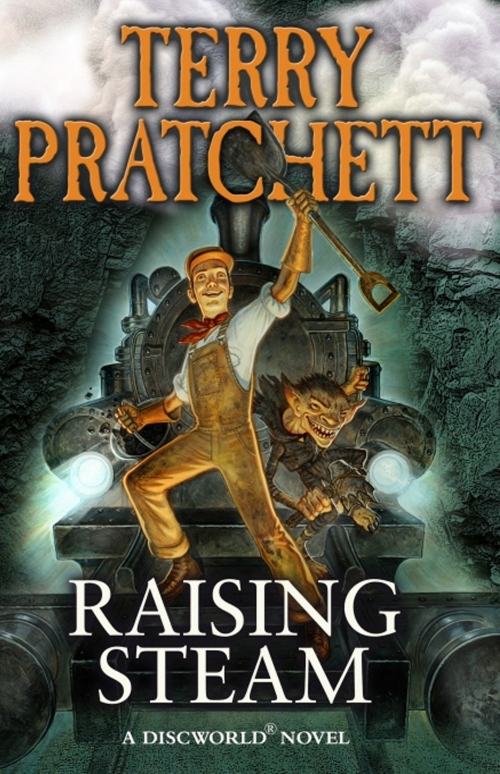 While similar in overall style, colour and type, the illustration of these two covers is distinctly different; with the Doubleday cover emphasising a feeling of chaos and speed and the Corgi cover creating a strong focal point as the train emerges triumphant from a plume of steam.

I love the feeling of movement on the Doubleday cover, from the the winding train and the flying axes to the varied and distorted facial expressions of the passengers. This is a cover that delights in emphasising movement. As evocative as this is, however, I find that my eyes can’t quite focus and it loses some of the refinement where the lines have been blurred.

By comparison, the train in the Corgi cover has a powerful presence – lights streaming in the dark, steam rising, a dark and rugged stone wall dominating the backdrop as the train speeds ahead. The composition and darker contrast present in this cover are also much more appealing which is why, despite being a close run thing, it is this week’s winner!

Which cover wins your vote this week? Have a cover of your own? – Post the link below!

Next week’s theme is:

Just as it seems.

A cover featuring a person holding an object.

Steve @ Books and Beyond Reviews

Kristi @ Confessions of a YA Reader

13 thoughts on “The Friday Face-Off: At the end of every light, is a tunnel of darkness.”