Welcome to The Monthly Round-Up. Join me as I look back on the past month to see which books I’ve read, the reviews I’ve posted, the goals I’ve completed and my all important Book of the Month!

Ahh November, the craziest month of the year! Not only was this Sci-Fi Month, hosted by Rinn Reads and Over the Effing Rainbow, but I started a new job! This meant I was unable to post as much as I had wanted to as I hadn’t prepared in advance (tut tut!).  I’m only just getting used to my schedule – or in other words: If I want to post anything at all I need to prepare in advance! – so hopefully December’s posts will be a little more organised.

Onto the overview. I read five books in November, none of which featured on my Sci-Fi Month Introductory Post! But they were all excellent reads and reviews for the unreviewed will be cropping up in the next few weeks. I managed to jump on the Sci-Fi Month Read Along of The Long Way to a Small, Angry Planet (hello Book of the Month!) and I also reached my Goodreads Reading Challenge of 100 books in 2015 after finishing Superposition. Hurrah!

So without further ramblings, here are the books I slowly devoured in November:

Down Station by Simon Morden

The Long Way to a Small, Angry Planet by Becky Chambers

The Long Way to a Small, Angry Planet

To finish all the (poor neglected) novels I’m currently reading

1 of 4 | Broken Homes by Ben Aaronovitch

To hop onto sci-fi month over at Rinn Reads

Down Station by Simon Morden

| Other Posts From November |

The Month Ahead: November 2015

The Long Way to a Small, Angry Planet – Read Along Week 1

The Long Way to a Small, Angry Planet – Read Along Week 2

The Long Way to a Small, Angry Planet – Read Along Week 3

The Long Way to a Small, Angry Planet – Read Along Week 4

Initially I requested this book because.. well.. it has a pretty cover! However, after attending the Gollancz Book Festival in Manchester and seeing a very funny Simon Morden on the panel, I couldn’t wait to crack this book open. Down Station is a novel about fresh starts and new beginnings, about bravery and loyalty and the nightmares that haunt us, and the determination of the human spirit. This is a sweeping science fantasy which harks back to genre traditions and takes the reader into a world of strange magics and even stranger creatures.

A small group of commuters and tube workers witness a fiery apocalypse overtaking London. They make their escape through a service tunnel. Reaching a door they step through…and find themselves on a wild shore backed by cliffs and rolling grassland. The way back is blocked. Making their way inland they meet a man dressed in a wolf’s cloak and with wolves by his side. He speaks English and has heard of a place called London – other people have arrived here down the ages – all escaping from a London that is burning. None of them have returned. Except one – who travels between the two worlds at will. The group begin a quest to find this one survivor; the one who holds the key to their return and to the safety of London.

And as they travel this world, meeting mythical and legendary creatures, split between North and South by a mighty river and bordered by The White City and The Crystal Palace they realise they are in a world defined by all the London’s there have ever been.

Reminiscent of Michael Moorcock and Julian May this is a grand and sweeping science fantasy built on the ideas, the legends, the memories of every London there has ever been.

Down Station follows the tale of a group of multi-ethnic Londoners who find themselves transported to another world – Down – following a fiery encounter whilst working on the London Underground. For some, Down provides a chance for them to escape their pasts, escape the expectations of others and give them a new start in a land where anything may just be possible. For others, Down is hell and they will do anything they can to get back to London and the world that they know.

From the opening pages, Down Station sets a pace which is maintained throughout the novel. With barely a dull moment and an open ending which seems to yell sequel, this novel is a refreshing  and somewhat whimsical read. However, there were elements of the narrative which could have used a little more depth and explanation. The overriding danger which quite literally exploded into the opening chapters dissipated upon our company’s arrival in Down. Though there were plenty of dangers present in this strange new world – eaten by a monstrous fish? Sure! Carried off by a hungry eagle? Why not! – the narrative lacked the urgency and desperation that perhaps it should have had.

The world of Down, however, is certainly a captivating place which is portrayed in beautiful short passages of description. The similarities to an Earth of the past are quite apparent and though strange beasts and plants were hinted at if not described outright, I would have preferred Down’s otherworldliness to have been more apparent. Having said that, this is a world which is accessed by a portal from our own so perhaps a sense of familiarity was the intention all along.

The magic system Morden has created certainly makes up for any similarities to our own world but, again, the danger could have been turned up a notch. This is a world where, if you have the ability, anything is possible – you can be whoever you want to be, do whatever you want to do – but not without paying a price. Either you take control of your powers or they will certainly take control of you. The times when our protagonists were confronted by this strange magic certainly made for interesting reading.

The most intriguing aspect of this magic system, however, has to be its worldbuilding element. This is a world powered by magic, a magic which runs along lines of power which connect one portal to another. It is at these intersections that Down starts to respond to its inhabitants and the magic truly happens. Castles, fortresses, towns and villages spring up in righteous glory from the earth or fall into rot and ruin until they disappear into decay. Simon Morden has created something that sits well in the fantasy genre but has a distinctly unique feel to it which I only hope will continue to grow in future novels.

Down Station also has a whole host of characters to sink our teeth into too (if you so wish). Our main protagonists are Mary and Dalip, who are both incredibly likeable but in completely contrasting ways. Even Mary’s verbal diarrhoea when it came to f-bombing only serves to make her a more believable character.  Morden manages to depict their personalities incredibly well by including their thoughts and beliefs throughout the narrative and both these characters have something very distinctive and unique in their portrayal.

The secondary characters could perhaps have done with a little more attention as, though they featured heavily throughout the novel, it felt like we never got to learn much about their lives or motivations. Their snapshot depictions were enough to keep me reading but these intriguing hints only left me wanting more! The villains of the piece also suffered from the ‘lack of danger’ present in parts of the plot and, even though they were ruthless and dangerous, they almost felt devoid of both ruthlessness and danger. This, however, did not stop it from being an absorbing read. All the right elements were there, I just wanted more!

Down Station is a fun and interesting read which I zipped through in no time at all! Though there were elements of the novel which I felt could have used a bit more depth, this didn’t spoil my enjoyment and I’m sure fans of both science fiction and fantasy will find enough to keep them happy! I’ll certainly be on the look out for more books by Simon Morden… and perhaps next time I can get one I can get signed!

What are your feelings for science fantasy? Do you enjoy the crossover between genres?

In The Month Ahead, I will be rounding up the books I am currently reading, the ones I will start this month, and the ones I intend getting my mitts on… if I haven’t already! I will also be sharing any news about features or posts on Books by Proxy, and anything in the book world that has me all excited!

Oh no! Two of the above books were on October’s Month Ahead post! How very, very shameful. Poor Emma is such a small book that I lost her in a coat pocket! But after a daring rescue she’ll soon be on the read pile (unlike The Daylight War! Oops!). The end of October and the start of November have seriously reduced my reading time (yet it didn’t stop me picking up Broken Homes before I’d finished the other three) and I didn’t even finish NOS4R2 in time for Halloween! For shame indeed. Will definitely make a concerted effort to not start any more books before finishing these four!

In other news, a while back I put my name down for Sci-Fi Month, hosted by Rinn Reads and Over the Effing Rainbow, and still haven’t hopped on-board that ship! So once I’ve worked on some posts and rifled through my science fiction collection, expect some sci-fi goodness this November. 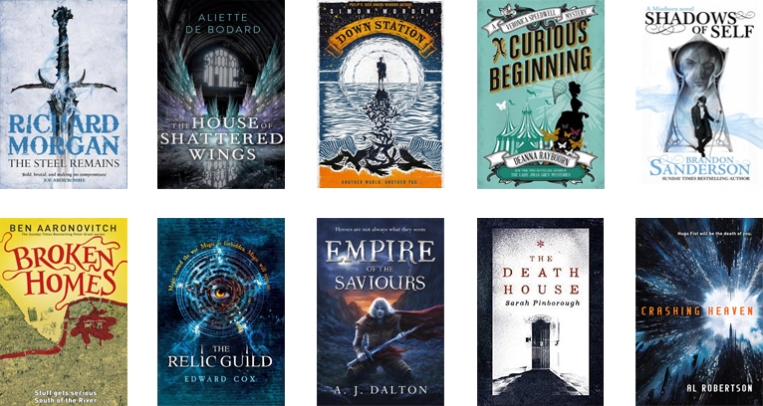 Oh Gollancz Book Festival, you broke me! Look at all these bad boys. With the exception of The Relic Guild by Edward Cox; Simon Morden’s Down Station (which I received through Netgalley), and A Curious Beginning by Deanna Raybourn (which I won), all these books were acquired there. And Simon Morden was actually at said festival so if I hadn’t already had one waiting at home I probably would have ended up with one then and there. So my book festival acquisitions are: Richard Morgan’s The Steel Remains, Aliette de Bodard’s House of Shattered Wings, Brandon Sanderson’s Shadows of Self, Ben Aaronovitch’s Broken Homes, A.J. Dalton’s Empire of the Saviours, Sarah Pinborough’s The Death House and Al Robertson’s Crashing Heaven. Phew.. just a few books to be getting on with.

To finish all the (poor neglected) novels I’m currently reading

To hop onto sci-fi month over at Rinn Reads

Have you picked up any great books lately or read any of those mentioned above? What are your goals for the month ahead?