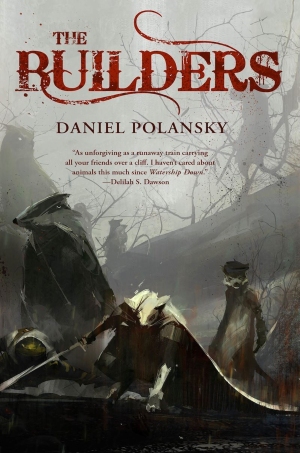 Reconquista was cleaning the counter with his good hand when the double doors swung open. He squinted his eye at the light, the stub of his tail curling around his peg leg. “We’re closed.”

Its shadow loomed impossibly large from the threshold, tumbling over the loose warped wood of the floorboards, swallowing battered tables and splintered chairs within its inky bulk.

“You hear me? I said we’re closed,” Reconquista repeated, this time with a quiver that couldn’t be mistaken for anything else.

The outline pulled its hat off and blew a fine layer of grime off the felt. Then it set it back on its head and stepped inside.

Reconquista’s expression shifted, fear of the unknown replaced with fear of the known-quite-well. “Captain . . . I . . . I didn’t recognize you.”

Penumbra shrunk to the genuine article, it seemed absurd to think the newcomer had inspired such terror. The Captain was big for a mouse, but then being big for a mouse is more or less a contradiction in terms, so there’s not much to take there. The bottom of his trench coat trailed against the laces of his boots, and the broad brim of his hat swallowed the narrow angles of his face. Absurd indeed. Almost laughable.

Almost— but not quite. Maybe it was the ragged scar that ran from his forehead through the blinded pulp of his right eye. Maybe it was the grim scowl on his lips, a scowl that didn’t shift a hair as the Captain moved deeper into the tavern. The Captain was a mouse, sure as stone; from his silvery-white fur to his bright pink nose, from the fan-ears folded back against his head to the tiny paws held tight against his sides. But rodent or raptor, mouse or wolf, the Captain was not a creature to laugh at.

This is the second time I’ve read The Builders by Daniel Polansky and I already love it just as much as the first time, if not more. This is where grimdark meets The Wind in the Willows and I can’t get enough of it.

The opening paragraphs are exemplary of the character of this novella; and with gritty descriptions flowing seamlessly around a cast of perfectly wrought misfits, The Builders etches out a secret world of cut-throats, snipers and gambling stoats in which I can’t wait to be lost..

What are you currently reading? What were your first impressions?

Welcome to The Friday Face-Off, a weekly meme here at Books by Proxy. Join me every Friday as I pit cover against cover, and publisher against publisher, to find the best artwork in our literary universe.

The Builders by Daniel Polansky

Welcome to the Friday Face-Off! For this week’s comparison we’re on the look out for covers which feature mice (though all rodents are welcome!).

Published by Tor globally and by Acheron in Italy, The Builders by Daniel Polansky features two incredibly striking covers that just beg for you to turn the first page. Take a look at these two artistic beauties and see which one is your favourite.

I’d like to say the choice was incredibly difficult this week – the runner-up is, after all, an absolutely amazing piece of art – but I can’t help but be seduced by the sheer beauty and atmospheric qualities of Richard Anderson’s artwork. Needless to say, due to my quite clear bias, it was an unfair contest from the start.

But let’s not overlook the details. The Tor cover is dramatic, gritty and gives the reader an immediate feel for the dark (if humorous) writing within while the Acheron cover speaks of comic western violence with its bold, selective palette and blocky typeface. I love the ink-like splatters and watercolour wash of the former and the styalised figures of the latter. But most of all, I love that both covers have instantly recognisable characters and that both transport you instantly into Polansky’s writing. Amazing covers. Amazing book.

Which cover wins your vote this week? Have a cover of your own? – Post the link below!

Next week’s theme is:

Shoot for the moon. Even if you miss, you’ll land among the stars

A cover which features the moon

Welcome to Teaser Tuesdays – a weekly feature hosted by Books and a Beat. Expect a new teaser every week!

Book One of the Chronicle of the Unhewn Throne

“The room was a cramped garret on the fourth storey of a tall, narrow building next to the harbour. A rickety staircase spiraled up tightly, the ceiling so low Valyn had to crouch, boards so warped and twisted that each time they groaned beneath his weight he wondered if the whole thing was going to crumble, dumping him into the cellar.“

The circle is closing. The stakes are high. And old truths will live again . . .

The Emperor has been murdered, leaving the Annurian Empire in turmoil. Now his progeny must prepare to unmask a conspiracy. His son Valyn, training for the empire’s deadliest fighting force, hears the news an ocean away. And after several ‘accidents’ and a dying soldier’s warning, he realizes his life is also in danger. Yet before Valyn can act, he must survive the mercenaries’ brutal final initiation.

The Emperor’s daughter, Minister Adare, hunts her father’s murderer in the capital. Court politics can be fatal, but she needs justice. Lastly Kaden, heir to the empire, studies in a remote monastery. Here, the Blank God’s disciples teach their harsh ways, which Kaden must master to unlock ancient powers. But when an imperial delegation arrives, has he learnt enough to keep him alive, as long-hidden powers make their move?

Another day, another cover reveal missed! Last week, Brian Staveley and Tor revealed the cover art for Skullsworn, a new novel set in the world of The Emperor’s Blades. And yes, that can only mean one thing – another absolutely phenomenal cover by Richard Anderson!

Anderson’s artwork never fails to blow me away and has become an unchallenged fantasy favourite. With his dynamic compositions, recognisable style and effortless blend of a vibrant and muted palette, this cover reveal has left me itching to get my hands on – and possibly frame – Skullsworn.

Remember to check out the Tor post for the inside scoop and a whole host of wonderful sketches!

Brian Staveley’s new standalone returns to the critically acclaimed Chronicle of the Unhewn Throne universe, following a priestess attempting to join the ranks of the God of Death.

Pyrre Lakatur doesn’t like the word skullsworn. It fails to capture the faith and grace, the peace and beauty of her devotion to the God of Death. She is not, to her mind, an assassin, not a murderer–she is a priestess. At least, she will be a priestess if she manages to pass her final trial.

The problem isn’t the killing. Pyrre has been killing and training to kill, studying with some of the most deadly men and women in the world, since she was eight. The problem, strangely, is love. To pass her Trial, Pyrre has ten days to kill the ten people enumerated in an ancient song, including “the one you love / who will not come again.”

Pyrre is not sure she’s ever been in love. If she were a member of a different religious order, a less devoted, disciplined order, she might cheat. The Priests of Ananshael, however, don’t look kindly on cheaters. If Pyrre fails to find someone to love, or fails to kill that someone, they will give her to the god.

Pyrre’s not afraid to die, but she hates to quit, hates to fail, and so, with a month before her trial begins, she returns to the city of her birth, the place where she long ago offered an abusive father to the god and abandoned a battered brother—in the hope of finding love…and ending it on the edge of her sword.

What do you think of the cover for Skullsworn? Does this sound like something you would read?

| The Friday Face-Off: The Emperor’s Blades by Brian Staveley |

This week’s Friday Face-Off is taking a very thorough look at the covers for Brian Staveley’s The Emperor’s Blades, the first Chronicle of the Unhewn Throne and a somewhat new addition to my reading pile (yes, I’m late to the party once again!). Published by Tor Books in both the UK and the US, we have two beautiful covers to cast our eyes over… and if you hear me squealing a little it’s because we have a ridiculously gorgeous Richard Anderson cover in the mix!

“I love the way this cover captures the cold menace that pervades the book. All the elements are there, presented in a wonderfully understated way — the mystery, the malice, even the grim determination of the Emperor’s children, which I see strung through the tendons of the hand gripping the sword.”

“I try not to be superficial, but when Richard Anderson’s stunning cover finally sidled up to the bar, my first thought was that she was, well… gorgeous. Didn’t pay much attention, at first, to whether we had anything in common—I just stared and stared, trying to keep my mouth closed.”

Oh dear, don’t look at me that way beautiful and atmospheric Tor UK cover! I can’t help it -Richard Anderson will probably win every time! A cold brutality permeates the UK cover and, overlaid with an elegant and eye-catching typeface, creates an atmospheric piece of art which would make me pick up this book in a heartbeat. The US cover, however, is an entirely different prospect. Showcasing the beautiful artwork of Anderson, this is a cover which stirs the imagination and conjures up the fantastical worlds which lie just beyond its borders. Both beautiful and evocative, this is a cover which is hard not to look at and is a definite winner for me!

Have you read The Emperor’s Blade? Which is your favourite cover?