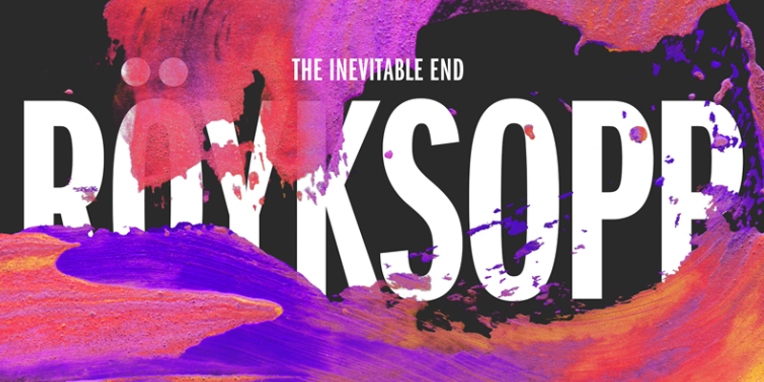 Well it’s about time I put something other than a soundtrack on Bookish Beats. So here we have it, Röyksopp’s last LP – The Inevitable End. When a soundtrack doesn’t do it for me, downbeat electro is often a good choice. For science fiction it can be perfect. Rhythmic. Mellow. Something that doesn’t distract but adds to the book. It’s just one of those albums you can have on a loop and forget that you’ve listened to it ten or fifteen times in a row. Not bad.

The Inevitable End is a fantastically diverse album which varies between slow instrumentals, steady paced synth numbers, and electro pop vocals.  I have a love hate relationship with electro pop so whilst some of the tracks hit me in the sweet spot, some are just….well just too pop. Not my thing. Thankfully these are at a minimum and there are so many amazing tracks that I soon forget they’re even there.

The beauty of downbeat electro is that it can go equally well with action scenes, dramatic scenes, and slow scenes, so categorising this album into ‘top track for…’ was difficult. All the tracks work to varying degrees and the steady beat keeps the pace of reading at a happy medium. However my preferences, with the exception of Monument, generally lie with the more instrumental tracks. The fewer vocals the better.

If you’re not adverse to electro and like Kraftwerk influenced music (Skulls is a brilliant example and Save Me samples Kraftwerk’s Home Computer) then it might just be worth pressing play. Even if this is their last studio album, it won’t be the last Röyksopp album featured here.