Welcome to the Kushiel’s Dart Read-Along, where week by week we read and explore the first in the Kushiel’s Legacy series by Jacqueline Carey. If anyone would like to join in with this Read-Along, just head on over to the Goodreads group page and sign up. 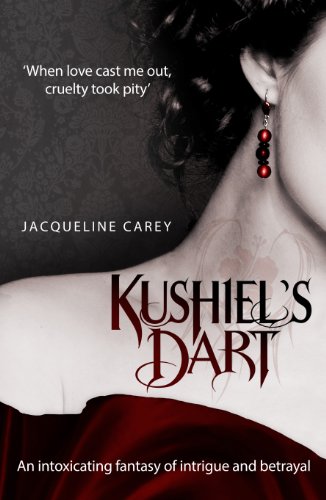 After a somewhat slow start in which a number of issues presented themselves, Chapters 17 to 31 of this Read-Along have really upped the ante and have definitely suckered me into the world of Terre D’Ange. Scroll down for sex, magic, politics and murder as I answer a number of questions prepared by Susan at Dab of Darkness.

Be warned – there will be spoilers!

We get a few more hints of magic or the supernatural in this section. Phèdre sees Kushiel’s visage after Alcuin is injured; Hyacinthe’s mom & he himself both have things revealed via the dromonde; that moment of deep peace at Elua’s statue. What do you think of magic in this world?

The magic in this world appears subtle and strictly low fantasy. In fact, at this point I hadn’t actually thought of it as magic at all. It appears more like the faith and magic woven into our own history, where powerful and painful experiences create religious fervour and experiences of the unknown weave their own magic when no other explanation is to be had.

Phèdre has grown up in service to Naamah, well before she pledged herself, and her faith and beliefs are an intrinsic part of her character – how could they not be when they themselves are descended of angels – so it seems right that, as she undertakes assignations in Naamah’s name, she feels the spiritual connection much more deeply, resulting in visions in moments of pure pain and ecstasy.

As for the Tsingani, the supernatural premonitions that they experience seem more akin to our own folklore and mysticism. I look forward to seeing how this connection to the dromonde, and the subtleties involved in this type of supernatural magic, develops over the course of the novel.

More politics! For those new to the series, what do you make of Baudoin and his mother, the Lioness of Azzalle? For those rereading, are you noticing details you missed before?

The intrigue and politics of Terre D’Ange really up the ante in this section of the novel as we are thrown head first into conflict between powerful houses. And, for me, this is where things really start to get interesting.

As we are pulled away from Phèdre’s previously youthful and somewhat naive experiences in the Night Court, and as we begin to understand the dangerous and calculating game played by the nobility, we are given a glimpse of the power struggles, manipulations and extent to which people will go to bring land, people and houses under their control. And, for all that Delaunay is secretive with his own motivations, it also becomes clear how deeply rooted both he and Melisande are in this deadly game.

Both Baudoin and the Lioness of Azzalle appear fascinatingly flawed and brilliant characters and, although we are only given brief glimpses of their lives and sins, we can clearly see their desire, their power and their guilt. Where Baudoin is the epitome of spoilt arrogance and entitlement, the Lioness is a skilled and powerful manipulator who I am sorry we didn’t get to see more of at the height of her power. I only wonder who will come to take her place…

What do you think of Alciun’s final assignation? Guy’s death? Would Alcuin have been happier, but perhaps less useful, as something other than Naamah’s servant?

At this point in the novel we really see how much Alcuin despairs of his service to Naamah as he risks everything to gather Delaunay’s secrets and complete his marque, resulting in his pain, guilt and sorrow at the death of Guy.

I really felt for Alcuin at this point and it made me question Delaunay and his single-minded pursuit of powerful secrets, when it was so clearly at the expense of Alcuin’s own feelings and wishes. It also made me wonder why, for all Delaunay’s masterful perception, he had not realised how badly this service suited his charge.

With perhaps the exception of Phèdre, it also reiterates the point that children growing up in this world are groomed into positions they neither want nor enjoy and that it really shouldn’t be a choice a child should have to make. Whether out of loyalty or his love for Delaunay, there are infinite ways Alcuin could have repaid any debt to him. Indeed, Delaunay could have tutored him to gather information and secrets in much the same way he does himself, without having to sell his body in the process. At this point, I truly have no love lost on Delaunay.

Phèdre has a new bodyguard – a Casseline Brother, Joscelin Verreuil. What do you think his life was like before this posting? Are you surprised that Anafiel didn’t dismiss him after the confrontation with Childric d’Essoms?

I find the concept of the Casseline Brotherhood very intriguing and would love to understand more about their background, their training and their beliefs. Joscelin Verreuil seems young, untested and inexperienced, but the contrast he provides to Phèdre’s vibrant, sexual and mischievous character is wonderfully done. I’m looking forward to seeing how both his character and his relationship with Phèdre develop over the course of the novel.

We finally meet Barquiel L’Envers. How dangerous do you think this man is? What do you make of his history with Anafiel?

Oh how I enjoyed watching Delaunay squirm under Barquiel L’Enver’s powerful gaze. I am almost a bit worried that I’m enjoying all the villains of the novel far more than those we are supposed to empathise with…

How did you feel about Phedre granting Childric another assignation? Was she right that she owed him a debt?

As a servant of Naamah, Phèdre used her power over Childric D’Essoms to bargain with him outside an official assignation. Therefore, in her view, she still owed him a debt in return for this favour. Her motivations are also not entirely selfless as she also used this experience to feel pain, pleasure and forget her mounting woes at the time. I also particularly enjoyed the stark contrast between the pain inflicted by D’Essoms and the care he takes to ease Phèdre’s pain afterwards.

Alcuin has completed his marque and displays it to Anafiel. How do you feel about the shift in their relationship? Phedre’s response to it?

I found this latest development somewhat horrifying. Alcuin was rescued and raised by Delaunay from childhood, they display a father and son relationship throughout the entirety of the novel up until this point, and Delaunay still holds considerable power over his charge. Moving from father and son to lovers makes me incredibly uncomfortable and I almost wish Carey had taken the time to develop a love and bond between them which doesn’t revolve around sex, lust and desire. After all, we can all feel love and loyalty to others without the need for lust or romance. This development does not sit well with me.

If anyone would like to join in with this Read-Along, just head on over to the Goodreads group page and sign up.

What are your thoughts on this week’s instalment of Kushiel’s Dart?